Then, a left on Little Rock City Road leads to a parking area with some nice picnic shelters.  It looks pretty ordinary with nothing hinting at any city of rocks.  But, walking to the east, you see large cracks opening in the mountaintop.  Not much soil up here.  The cracks get wider and soon you are looking at huge 25 feet high rocks that have separated from the mountaintop and apparently slid down the slope. The rock appears to be a conglomerate with rather large sand and pebble content. 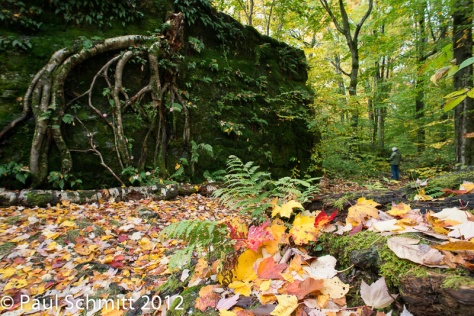 The scale of the rocks dwarfs a person.  The tops of the rocks have their own small forests of trees.  Some of the trees send their roots over the side of the blocks to seek water and nutrition at the floor of the forest.  Most of the rock surfaces are covered with moss and lichen, plus small ferns.

There is a marked trail through Rock City, and the popular Finger Lakes Trail also goes through it.  I’ve followed the trail and each time, I begin to get disoriented and uncomfortable about where the trail will take me, so I backtrack using the trail  markers rather than trust that the trail will loop back to the parking area.  (I’ve not found a trail map to use.)  On this recent visit, my backtrack came out somewhere different than where I entered.  It really is  a most confusing maze.

I decided to go to Rock City in  autumn hoping for some brilliant reds.  Some of the trees were maples, but it seemed the ones with red leaves lost their leaves early.  Still, there are so many  dramatically shaped trees, seemingly contorted by the struggle to compete with the large monoliths of rock, that I found  interesting images.

The large maple above looked like some giant tree-man.  Wasn’t there a Disney movie in which the trees came to life as rather dangerous walking beings? This one would have fit into that scenario.  Using a wide angle lens to capture the large scale only exaggerated the contorted shapes.

When we arrived, shortly after some showers ended, no one else was there. But soon, several cars arrived, some with families.  The children explored this wonderland of large rocks the size of two story houses, and of towering trees.  The adults seem to sense the chance to get lost and kept in contact with their young.  All, adult and child, were in awe at this natural phenomenon.

As a note to photographers, I will suggest that Rock City is not a particularly easy place to work.  My best images were with focal lengths beginning at 20 mm, and rarely above  40 mm.  At such wide angles, it is sometimes difficult to reduce the distracting elements from the image.  Many of the narrow slots between rocks get little light, and the bright sky above makes for difficult lighting.  I did not use HDR (high dynamic range) methods in these photos, but this would be a perfect place to use it.

I heartily  recommend Rock City for the child in us all, and for the photographer looking for a wonderland.   Who really needs to see seven states at once?