The digital photography has opened a new era in low light photography.

In the film era, high ISO speeds meant grainy images. Not so now! Mike Goldstein and Paul Schmitt addressed the subject at our December meeting, first showing the increased noise in a scene as the ISO rose, and then using Lightroom to remove noise. Discussion re- vealed that many are unfamiliar with this and miss the opportunity to boost ISO enough to gain fast shutter speeds in low light. This is key to good subject sharpness. So, we will revisit this. The image at right has a wide range of tones from dead black to soft whites. Image noise is analogous to the static heard on a radio when the signal is weak. Dark tones have a weaker “photon signal” and are noisier.

Noise first becomes slightly apparent at ISO400, with it clearly growing in severity at ISO800.  (Let’s use the highest ISO6400 so that the result is most apparent in the  limited resolution of the present format.) END_OF_DOCUMENT_TOKEN_TO_BE_REPLACED

After a fruitless trip to find Showy Lady’s Slippers this morning, I stopped by the Redtail Hawk nest in Ithaca. It’s been five days since I saw them, and the change is dramatic.

First, the chicks seem to be getting more demonstrative.  This chick seems to be giving the adult some demand in full voice.

The adult did not stay very long.

I noted two changes today.  First, the chicks are now have the strength to break open the Chipmunks without the aid of an adult.  That shows considerable progress.  Second, they are testing their wings frequently.

I am wondering how many more weeks before they take flight.  Likely, it will be a surprise.

Ray Hunt and I went to Coy Glen on Tuesday.  It is a natural area of Cornell Plantations.  There is one nice drop of about 12 feet with a secondary ledge about 2-1/2 feet in height.  We advise caution at Coy Glen.  Beyond the obscure access on Culver Road, the trail is essentially unmarked and the slope to the waterfall is steep and slippery when wet.  Never attempt this alone.  Please consult us before going there.

We arrived around 9:30 in the morning after a fifteen minute walk into the falls. Ray’s initial photo shows the wonderful reflections on the smooth rock surfaces below the falls.

At this  time in the morning, the falls were in shadow. As we photographed, we realized that we were soon going to lose the good light as bright rays of direct sunlight were approaching to blow out the left side of the falls.

It is always interesting to see how two photographers, standing near the same spot, can see a different rendition of the subject.  My initial photo was different.

I captured less of the warm glow from my position to Ray’s right but found a pool of water that mirrored the creamy waterfall. I also chose a different aspect ratio with less foreground.

As I mentioned, there is a second drop that has fascinated me.  With care, and with rubber boots reaching my knees, I can stand in the stream below the ledge and show both drops.

Ray pointed out that the entry of bright sunlit areas called for some HDR processing. The image above was tonal mapped using four images.  Obviously, a steady tripod is required along with some adjustments to tonal values in the foreground.

The next meeting of the Cayuga Nature Photographers is to present black and white  images made by the members.  It has always seemed to me that waterfalls are one of the best subjects for that. So, I processed the  above image in Photoshop using the RGB channels. (I will likely be on travel and miss the  next meeting, so this is my contribution.)

Soon, we realized we were losing the good uniform light in the gorge and began the careful climb out of the streamside.  The route out requires using tree roots for hand holds initially until the ground becomes a little less steep.

Eventually, we came upon the more moderate slope and near the top, where Ray noted some beautiful fungi growing on the mossy covering of fallen tree branches.  The vivid scarlet colors were too much for Ray to pass up. (I just did not expect fungi and left my micro lens in the car. Shame on me.)

I believe this is Sarcoscypha austriaca, common name Curly-haired Elf
Cup.  I was impressed that Ray had a plastic bag to kneel on while contorted on the wet ground. I never think to do that and come home with dirty knees on my pants.

It was a beautiful day, unusually warm for mid March, and perfect for two retired gentlemen to take a saunter in the woods.  Ray treated me to a good cup of coffee and a delicious sour cream donut. That really made the morning perfect. 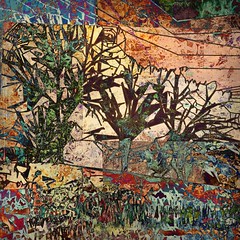 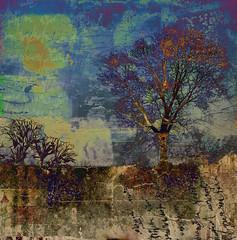 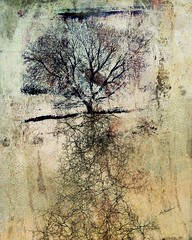